It is relatively light-weight as compared to other models in the series, giving it a compact look. The whole set-up arrives in a solitary box and setting it up is pretty straightforward.

The Yamaha DTX400K is no different in configuration from the rest of the models in the series, consisting of five drums, two cymbals, and a hi-hat. The tubular steel rack, a standard in the price range, has two upright side poles that are linked by a horizontal crossbar. The first and second tom pads are mounted on the crossbar while the third one, just like the hi-hat/snare and module, has its own mounting arm. Movement is restricted in the first two tom bars as these are mounted without “tom-arms”, but the floor tom’s positioning can be customized according to the needs of the user. 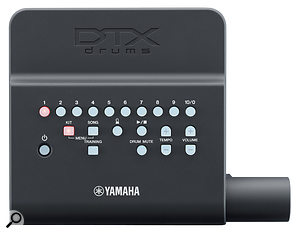 The TD400 control module is a small, matte-black unit with no LCD or knobs, simply three rows of grey buttons that light in orange when pressed. The DTX Drums legend embossed on the panel adds to what I think is a very cool, minimalist look. With no display, the buttons act as both selection tools and as a way of providing feedback on the current state of the unit or parameter value. I'll explain this later, but first let's look at the layout.

The module does not have a display and LED lights are used to highlight each of the 21 push-buttons. This makes it necessary for the new users to keep the manual by their side.

The right edge of the module has nine mini input jacks, for connections to the hi-hat, kick drum pedal and the pads. The left edge houses a socket for power, a USB socket, and two audio output jacks: one for mp3 players as the other one doubles as both stereo and headphone output jack. The USB socket can be used to integrate the kit into the Yamaha suggested Cubase Digital Audio Workstation. Although the kit does not support Android devices, the socket can be used to connect it to iPod Touch, iPad or iPhone using Yamaha’s official app.

The Menu mode can be activated by pushing the Song and Kit buttons together. One of the seven setting menus can be chosen by pushing number 1-7 buttons. These menus in the ascending order include Metronome Settings, Kit Settings, MIDI Settings, Hi-hat Settings, Trigger Settings, Training Settings and Other Settings.

The Yamaha DTX400K is an amazing kit for the amateur drummer, especially considering the other electronic kits in the price range. On the down side, the kit is quite inflexible thanks to metal rods, and the mini-jack audio outputs make the module feel a little shabby. The LEDs are also a drawback, but after some playing experience, the drummer gets used to it.

Overall, the built-in features are pretty good, allowing beginners to start learning drums without going into the technicalities of the instruments much.

Shop Now from Lahore, Karachi, Islamabad & all other cities of Pakistan.